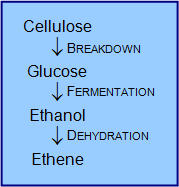 The conversion of cellulose to ethanol involves two main chemical processes, while conversion to ethene requires an additional step.

Cellulose is commonly decomposed in nature by many organisms. However, although they convert cellulose to glucose as a first step, they generally decompose it further into simpler substances such as carbon dioxide and water. Thus, the decomposition processes in nature are not potential commercial sources of glucose or ethanol, and cannot be used to aid in creating ethene from cellulose.

The following three processes are not fully developed or economically feasible, and it will probably require great oil shortages and extremely high oil prices before they cease to become as such. Environmentally, it must also be noted that energy is required in the cultivation of crops from which the cellulose is to come in the first instance. Unless this energy comes from renewable resources, the environmental benefits of using cellulose could be somewhat counteracted.

Cellulose to Glucose
Degrading cellulose chemically would take very severe chemical treatment and would require great amounts of heat and pressure. The amount of energy required in this process means that it is not economically viable and the benefits of using a more environmentally friendly source are counteracted. Therefore, rather than chemical degradation, a family of enzymes known as cellulases are used. These are found in certain bacteria that live in the stomachs of cows and termites, as well as in some fungi. Thus, enzymes perform both the synthesis and breakdown of cellulose. There are three enzymes from the cellulase family that catalyse the breakdown process:

Glucose to Ethanol
Once glucose has been made, it can be converted to ethanol through the process of fermentation. This process is performed in the absence of oxygen by the zymase enzyme secreted by yeast.

A number of different fermentation methods have been developed, and many of these have been trialled on a pilot plant scale. However, none are yet commercially viable. One problem of the process is that the yeasts used can only survive in ethanol concentrations of up to 15%, which means that the resulting mixture has to be distilled to produce pure ethanol. In order to maintain the environmental benefits of using cellulose to create ethanol, a renewable source of energy, such as solar power must be used in this distillation process. The fermentation process produces large amounts of waste liquors that would present major environmental problems.

Ethanol to Ethene
In the petrochemical industry, ethene is converted to ethanol through a process known as hydration (addition of water). In the reverse to this reaction, ethanol can be dehydrated (water removed) to produce ethene, a process that requires concentrated sulfuric acid and it currently quite expensive.